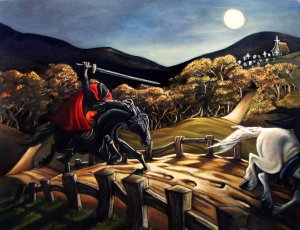 “‘Tis now the very witching time of night,
When churchyards yawn and hell itself breathes out Contagion to the world.“
–William Shakespeare

Bruno Bettelheim in The Uses of Enchantment: The Meaning and Importance of Fairy Tales writes that children work out their fears when being told dark stories of abandonment, death, witches, ghosts, and goblins. Even adults have fears that need dealing with. As Jennifer Smith Miller points out in her blog, “Becoming practiced at dealing with fears means remaining their master, not their servant.” What better way to practice dealing with fear than reading a scary book? This Halloween stay awake–and then pull the covers over your head–with one of these terrifying tales.

Leave a comment to share your own favorite spine-tingling stories of the supernatural and have a wonderfully spooky Halloween.

2 Responses to 13 Spooky Stories for Halloween

This site uses Akismet to reduce spam. Learn how your comment data is processed.